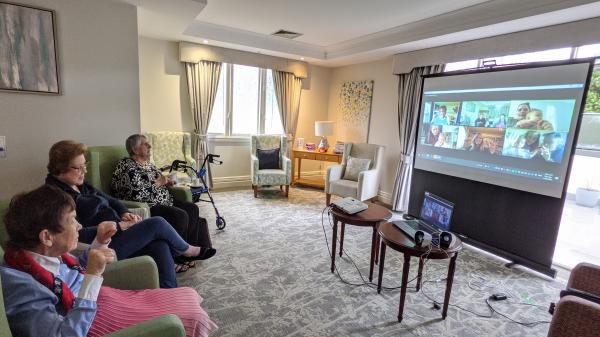 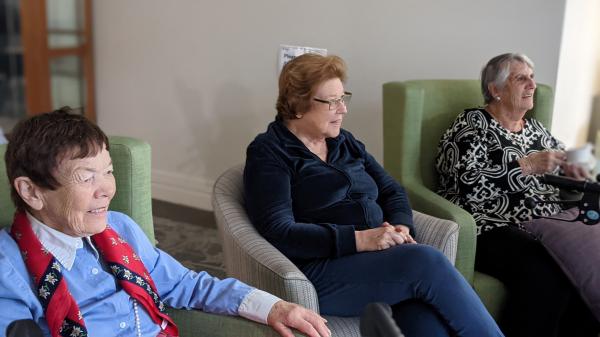 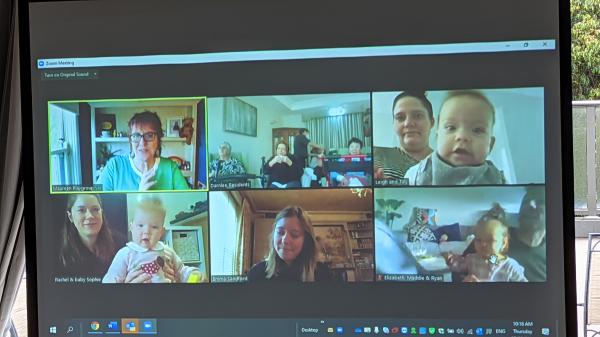 There’s a playgroup in Toorak that’s bringing generations together.

Each fortnight at aged care facility BlueCross Darnlee, residents and children interact via video over Zoom.

They play games, sing nursery rhymes, and have show and tell time.

The online all ages intergenerational playgroup started in March and will go face-to-face when it is possible to do so.

The sessions are scheduled for half an hour, however it’s not unusual for them to run overtime because of the fun being had by all.

Show and tell time is a big component, with children and residents eager to share what they’ve been up to.

Residents often share their art, craft work and personal photos, while the kids love showing off their toys.

There’s also ‘get to know a resident’, a segment where a resident, with the help of staff members, talk about their life – including what they used to do and whether they have children.

The interaction between the generations is beautiful to see.

Bluecross Darnlee Leisure and Lifestyle Coordinator Divya Babu said there were playgroup sessions taking place inside the aged care facility but that all changed when Covid hit.

“When we had kids coming in face-to-face from the local kindergartens or schools, we’d have 20 of them coming in,” she said.

“But with the world we are living in, we’ve had to go online which has been really hard but it makes a huge difference for the residents – seeing them (kids) on the screen.

“They read stories, sing songs, talk about their days.”

Divya says there are four families regularly involved in the Zoom playgroup sessions, with the ages ranging from 12 months to four years.

Typically between three and five residents take part in each fortnightly session, which is a real highlight on their social calendar.

“It’s good to see the residents waiting for them (the kids) to come online – it’s beautiful,” Divya said.

“I believe intergenerational connection is very important these days.”

South Yarra toddler Elizabeth, aged 14 months, is among the kids whose faces appear in the fortnightly Zoom calls.

Her father, Ryan Wilmann, says it’s lovely to see the interaction between generations.

“Elizabeth loves it, not just with the oldies but with the babies that join. She loves seeing other babies on there,” he said.

“As soon as you see your kid’s face and the older generation look into the camera, you see them want to pinch their (child’s) cheeks virtually.”

Ryan said his partner signed their family up for the virtual playgroup after finding out about it online at a time when mum groups were unable to catch-up due to the Covid lockdown.

The family are looking forward to one day meeting the aged care residents in person.

“It will be good to go and see them,” Ryan said.

“I can’t wait to be able to go there and let her (Elizabeth) roam.”

Maureen Hatcher of Playgroup Victoria says the virtual playgroup started after the organisation was contacted by BlueCross Darnlee.

“The aged care facility reached out to us some time ago,” she explained.

“The feedback from staff is that it has been amazing – that’s when you realise that there have been so many changes in the residents.”

The intergenerational playgroup is one of a growing number popping up all over Victoria and the rest of the country.

The benefits of these playgroups are plain to see. They encourage friendship across the generations, reduce feelings of isolation that often come with ageing, build respect between generations and allow the elderly to share their wisdom with the parents and children involved.

Maureen was visiting a facility where an Italian-born resident was quite upset until she came into the room for the baby intergenerational playgroup.

“It was so beautiful to see.”

If you are a family or part of an aged care facility keen to start an intergenerational playgroup, contact Maureen on mhatcher@playgroup.org.au

BlueCross Darnlee is also looking for some volunteers to run its fortnightly Zoom sessions. If you are interested email Divya at DarnleeLL@bluecross.com.au

A playgroup for young and old

There’s a playgroup in Toorak that’s bringing generations together. Each fortnight at aged care facility BlueCross Darnlee, residents and children interact via video over Zoom. They...

Double the fun for Federal MP

Q and A with Gretel Killeen: The best is yet to...