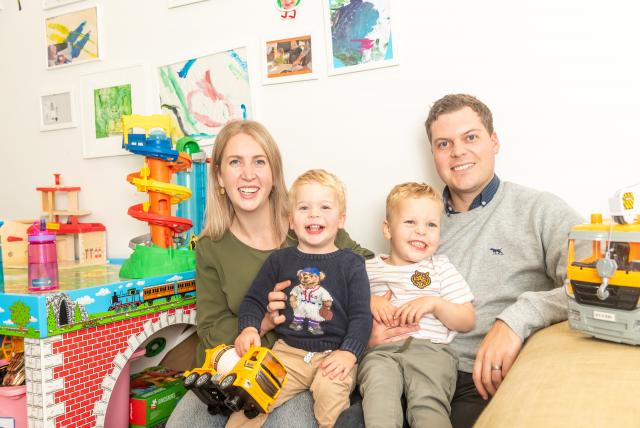 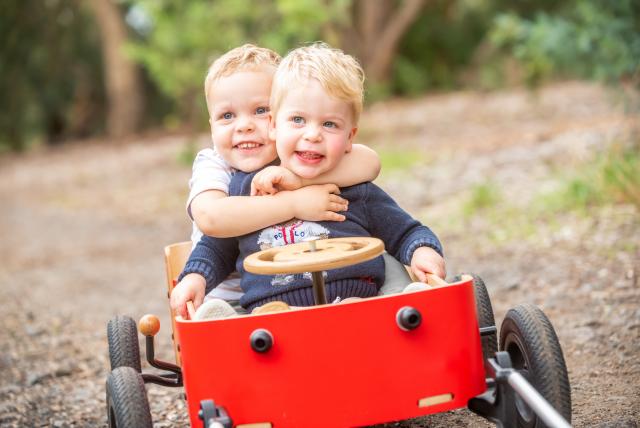 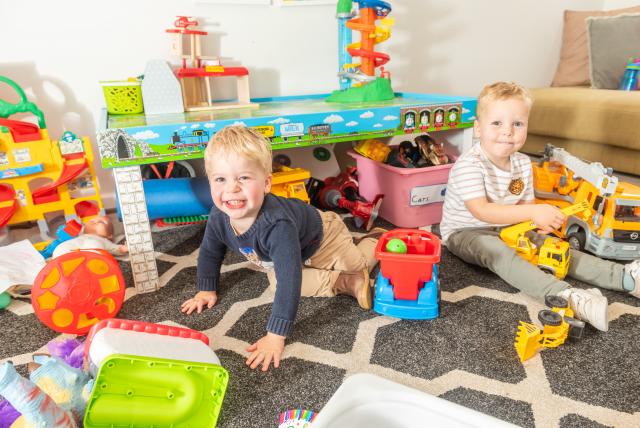 Georgie and Brett Timmins always wanted to be parents.

“It was really about knowing that the time was right,” Georgie said.

“We had done travel and were financially stable. There was no other reason that meant now wasn’t the right time.”

‘Now’ was nearly four years ago, when the Malvern East couple was living in London.

“We fell pregnant with William so we decided to plan our trip home, which encompassed nine weeks around Europe,” she said.

After enduring morning sickness, sea sickness and food poisoning that landed her in hospital, Georgie landed home in Melbourne, four months pregnant – and eager to surprise family and friends with the good news.

“We said ‘we’re really glad that the three of us are home’ – my mum was overjoyed,” she said.

When we spoke, William had just turned 3 and Joshua was 18 months old.

“I had an idealised perception of what motherhood was going to be like,” Georgie said.

“I thought I’d look into William’s eyes and fall madly in love.

“It wasn’t the case and it wasn’t instantaneous.

“When I reached out to family and friends and told them how I was feeling a couple of weeks postpartum, I found out it was really normal.”

But she still felt guilty.

“I think the stark reality of Brett having an instantaneous connection with William, that made it more difficult for me to let that guilt go,” she said.

“I reckon it probably hit around the eight or nine week mark.

“It was just taking time to just adore him and hold him, bath with him – all of those things.”

Feeling a pull to return to work as a teacher was another unexpected challenge.

“I always thought I wanted to be a stay at home mum,” Georgie said.

“I thought if you could financially do it, it would be the ultimate dream.

“Six weeks after having William, I knew I had to get back to work.

“My work really is part of my identity and I found that going to work was ‘my time’.

“Now the boys are in childcare full time because I’m working in a new role and studying special needs on the side.

“I wish I could just be happy with a low-stress job, but I have ambition and drive and I want to do well not only for myself, but I want to provide for the children and be a good role model for them.”

“It was awesome. I used to go to work, William would still be in bed, I’d get home and he’d already be in bed,” he said.

“I’d really only see him on weekends. It was awful.”

During the Covid-19 lockdowns Brett worked from home and relished spending special moments with Josh that he felt he’d missed with William.

“Moving forward, my company’s happy for me to work a day or two a week from home,” he said.

“That flexibility really helps with childcare drop-off or when Geogie’s working late.”

Brett said adding a second baby to their family was a challenge.

“But particularly because we had them pretty close together – they’re 17 months apart – William was very much still like a baby when Joshy came along.”

Georgie said it was “the most difficult thing we’ve ever done”.

“We ended up at sleep school twice,” Brett said.

A milk protein allergy played a role in his irritability, but the two boys still had different personalities.

“William, he was such a resilient, happy-go-lucky kid,” Georgie said.

She draws on her experience in the primary school classroom to adapt to their needs more than she likes to admit.

“I am always conscious of wanting to be their mother and not their teacher,” she said.

“Teaching has taught me the importance of routine.

“We try to make sure that the boys have meals at similar times each day, nap at the same time, bath and story time at the end of the day before bed.

“Teaching has also taught me that not everything goes to plan.

“It’s taught me to be flexible and adapt to what the kids need.

“I think something I am good at is letting them be in that area of challenge so they have the opportunity to grow.”

And Brett and Georgie love watching their boys grow together.

“But it’s lovely that when William goes in to see his brother at daycare at the end of the day, he’ll run up and give him a big hug and say ‘I love you’.

“Joshua won’t leave the house until he’s knocked on William’s door and woken him up.

“We really foster that relationship as well.

“When we go to bed at night we kiss each other goodnight and kiss the children, and they say goodnight to one another.

“I couldn’t care less if they get messy in the garden or if the car looks like a bomb’s gone off.

“But what we are really big on is kindness and respect for each other and for us.

“They’re the best thing I’ve ever done and I’d do it all over again a million times.

“I actually think that having children unlocks a part of your heart.

“You love your partner but it’s something bigger – you can’t describe it.”

[READER COMPETITION] – Win great prizes with our Winter edition of...

Check out these interesting prizes for pets and family...

Get ready to light up Stonnington

Throw expectation out the window

Be your best at De La Salle