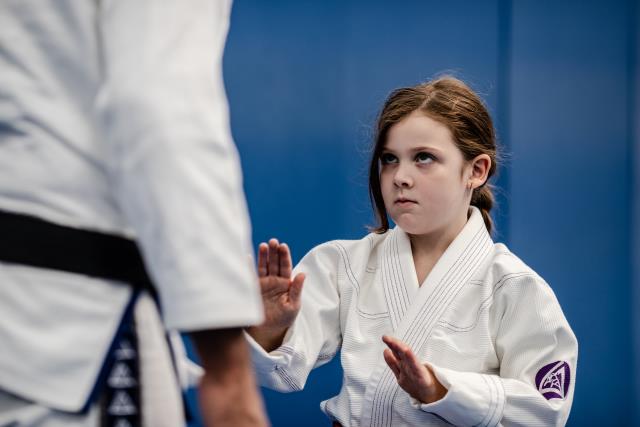 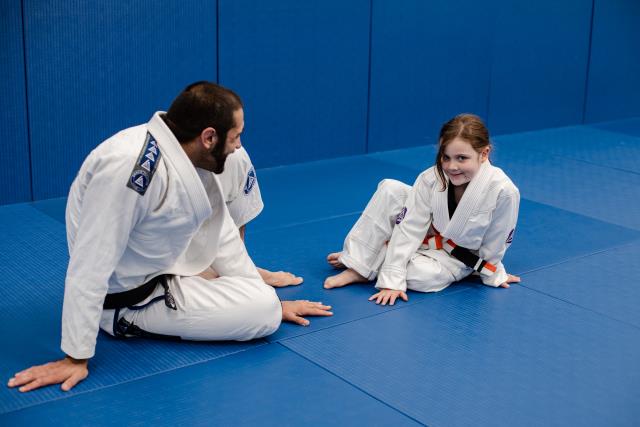 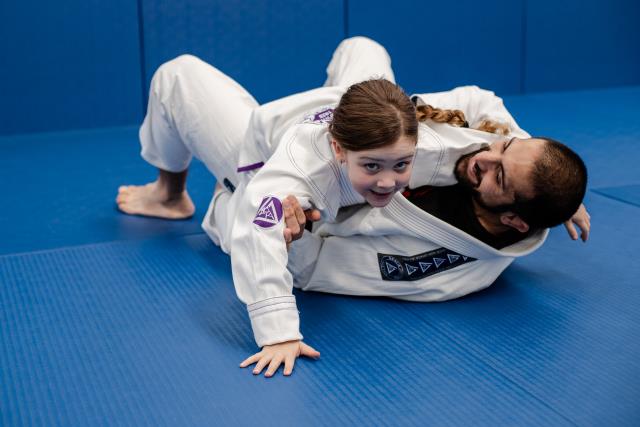 “Jiu-jitsu is about respecting yourself, your friends, your family, and even the bad guy,” Robbie Singh says to 43 kids kitted out in their traditional white gi uniforms.

They sit in a wonky circle on the spongy blue sprung floor of the immense warehouse space, performing a well-practised sequence of stretches as Robbie talks.

The Tuesday evening Bullyproof class starts at 5.15pm, but these students show no signs of

fatigue from their long school day.

They hang on Robbie’s words, engaged by his sense of humour and the familiarity of the class routine.

When Robbie asks for volunteers to demonstrate “20 crispy crunches,” hands shoot up. Choosing a student is easy, as he knows each of them by name.

With more than 20 years of martial arts experience, Robbie is now the head instructor at Gracie Jiu-Jitsu Burwood, in Melbourne’s eastern suburbs.

He holds a black belt in both karate and jiu-jitsu, and has been teaching classes for adults and children for the past 15 years.

His days are made up of a gruelling regime of both private and group classes, designed

to teach participants to combat the 36 most common attack scenarios identified by the Los Angeles Police Department.

However, it is in his Bullyproof classes, for children aged 5 to 14 years, that Robbie’s unique skill set and passion really pack a punch.

“What’s our first goal? Manage the distance, manage the damage,” Robbie says, as he and another instructor role-play an interaction between a bully and his victim.

As students partner up and practise the rolling sequence, Robbie moves between them,

He crouches low to talk to each student, retying their loose belts without breaking eye contact. As he assumes the role of the ‘bad guy’ to demonstrate a move, he somehow manages to shrink his almost-six-foot frame to become an equal opponent for a waifish eight-year-old – one that she can believably overpower.

Robbie was introduced to karate at age 10, weighing in at 80kg, and he unabashedly acknowledges that “I was a 10-year-old kid thinking I was going to turn into a Ninja Turtle or

a Batman at that point.”

Superhero ambitions aside, it was really a case of love at first lesson.

Robbie trained each morning from 6am to 7am before school, and headed straight back to karate after school from 4pm until 7pm.

Then he caught the tram down to his family’s restaurant and worked the busy period until midnight, when they ate dinner before heading home to sleep.

Alongside this crammed schedule of school, work, and martial arts classes, Robbie’s childhood was also defined by a rotating cast of guests in the three-bedroom house he shared with his parents and younger brother.

As his father worked three jobs and his mother worked two, Robbie’s parents were able to help 120 relatives relocate to Australia from India, all of whom spent some time living in Robbie’s home.

At one point, there were 21 people living in the house, with eight cousins sleeping head-to-toe in two king-sized beds.

This closeness was in stark contrast to his relationship with his mother’s side of the family.

“I’ve never known that side of the family because I’m half-brown in their eyes, and that means I’m devalued,” he said.

“It was an interesting dynamic, because that side of the family didn’t want anything to do with mixed races, whereas my dad’s side was oblivious to the idea of race.”

By the time Robbie was 14 he was being given leadership roles at his karate academy, and even teaching adult classes.

He saved up his tips from the restaurant to buy martial arts textbooks, as the VHS instructional videos available at the time were too expensive.

But when one of his students was beaten up at school by two older children, Robbie realised “sports karate was based for competition within a very finite set of rules, and that possibly this wasn’t the best thing for kids to be learning to defend themselves”.

Not wanting to give his students a false sense of security, he searched for a martial art that would actually enable a smaller person to prevail when threatened by a larger person.

“That became a real passion: how can I take somebody that’s unskilled and give them enough skill to feel like they could walk more confidently down the street without being attacked?” he said.

And he found the answer in Gracie Jiu-Jitsu.

Despite his affinity for martial arts, Robbie took a different path when he finished VCE.

He completed graduate and then post-graduate study in psychology and counselling, and accrued 10 years’ experience working in applied behaviour analysis (ABA), intervention focused on developing the social skills of children on the autism spectrum.

for ASD children and specialised training for their support teams.

Robbie combines this experience with his martial arts teaching by bringing the ABA methods to bear on his Bullyproof classes, where the students benefit from his clear communication and explicit instructions.

“Gracie Jiu-Jitsu develop the curriculum and pick the techniques that go into it, but the discussions that we have, that comes from my therapy background – the way that I present the information to the kids,” he said.

These discussions are a cornerstone of the Bullyproof classes, which teach a set of rules dictating physical force as a last resort, beginning with Rule 1: Avoid the fight at all costs.

“I really feel like the style of bullying is more detrimental than we’ve seen in the past because it’s more cognitive, it’s more mental bullying that’s going on, and it requires a more sophisticated style of intervention to deal with it, which kids don’t have developmentally,” Robbie said.

As a consequence, children have come to the academy with psychosomatic blindness, eating disorders, and even suicidal ideation, following years of bullying.

Within months, he often sees a completely different child emerge, with a greater understanding of the bullying dynamic, more confidence in themselves, and a positive community of people around them.

Seeing this transformation, parents often follow their children to the academy to begin their own jiu-jitsu journeys.

“I think that’s my greatest accomplishment, that we are getting the whole family trained, so the whole family has the same mentality, the same philosophy, and the same ideals that are driving them, so they’re more cohesive,” Robbie said.

Moving forward, one of his primary goals is to take his ‘Keep it Real’ seminars into more schools, providing them with strategies to address the rise in bullying.

As it does every week, the Bullyproof class ends with a game of war ball.

To the soundtrack of laughter and ecstatic shrieking, students dodge each other as they race across the floor, trying to avoid being hit by the gigantic brightly coloured balls that Robbie and the other instructors roll around the room.

For these few moments, all thoughts of bullies, classroom troubles, tomorrow’s potential battles in the playground warzone, can be forgotten.

Robbie gives every single student a farewell high-five, and they leave knowing he’ll be there again next week, fighting the good fight to ensure that they don’t have to fight the bad one.